Coaches have plotted and primed, players have trained themselves into the ground for it, while fans have had enough of weekends without it. Finally, after five months and six days, Premiership rugby union returns on Friday.

Harlequins will restart the season with the visit of Sale to the Stoop (19:45 BST), with nine rounds of an epic 2019-20 season to be wrapped up.

It sees Quins signing Chris Ashton face an immediate reunion against his old club, while England centre Manu Tuilagi makes his Sale debut after swapping Leicester for the Sharks.

What union will look like in the post-restart era is an unknown to some extent, after 159 days away.

There are new guidelines for players and referees around rucks and the breakdown, aimed at speeding up the contact area.

“Viewing on television will be close to as exciting [as normal] because of the time of year,” former England scrum-half Matt Dawson told 5 Live Sport.

“The players will be super fit and excited, the temperatures are soaring, the ground’s hard and the ball will be fast.” 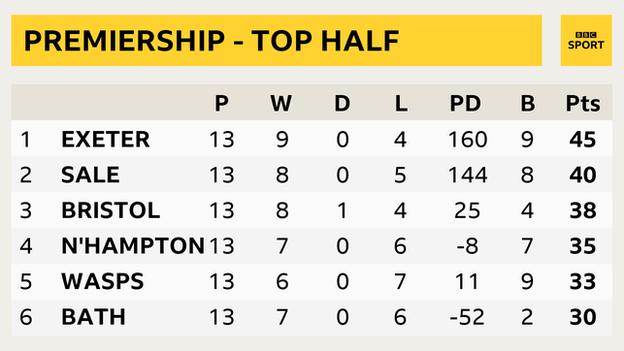 When the season came to a halt because of the coronavirus back in March, there was still plenty to play for in the Premiership.

While reigning champions Saracens were out of the title picture, having been relegated for multiple salary cap breaches over previous seasons, that left an intriguing battle at the top.

Exeter Chiefs were in pole position, but in the ambitious Sale and Bristol – in second and third – there are genuine title threats.

Northampton are a revived force, while Wasps, Bath, Harlequins, London Irish and Gloucester are all equally involved in the race for the top four, or at least Champions Cup rugby next season.

Only nine points separate Saints and the Cherry and Whites, in ninth. 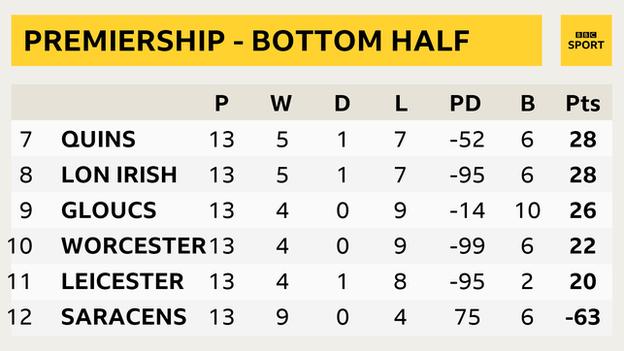 Sale and Bristol have been among the headline makers in the Premiership during lockdown with their transfer activity.

One player in particular to catch the eye is rugby league convert Semi Radradra, who was prolific in French Top 14 rugby with Toulon before moving to Bristol Bears.

“When people have seen the new facility [recently built training ground at Bristol] they say ‘Wow’,” director of rugby Pat Lam told 5 Live Sport. “The people who have seen Semi in that facility have gone: ‘Oh my gosh, wow!’

“Everyone’s hanging off him. I noticed the nines are running all their running lines when the ball goes to him. They’re waiting to get the offload.

“There are a lot of phenomenal players. He’s got an X-factor, yes, he’s got power – but the professionalism he’s got is unreal.”

No fans, no advantages?

Like other professional sports to have restarted seasons after lockdown, the Premiership will have to resume without crowds.

Empty stadiums will be the norm, with television cameras bringing the games to the public from afar.

“The beauty of what we’re about to do now brings it right back to why you played the game, to get out there and enjoy it,” Lam added. “Even when there were no crowds around, but you’re with your mates.

“We went down to Ashton Gate and had a training run to get an idea.

“When we go away from home, it’s the best, and that’s why I think the away advantage has probably gone, because when you go away it’s the crowd against you, so block out the crowd and it all becomes about us.

“Now home or away is about inner focus on getting your job done, being connected and focus on what we do as a team.”

Viewers will be treated to a new experience, away from the throb of a crowd.

“It’s like the old captain’s run on a Thursday or Friday afternoon when you go through the moves and your calls are echoing through the stadium and you’re hearing every word,” Dawson said.

“Every defensive shout up on the line and communications to the referee will be quite interesting I should think.”

All 12 clubs have made a commitment to the Premiership’s ‘Rugby against Racism’ cause, and showing support for the Black Lives Matter movement.

Some teams have committed to taking the knee, Bristol players will form a heart shape and others will make a ‘V’ shape as a team.

“The one thing I think is integral is taking ownership,” said former Quins wing Ugo Monye, a member of the players’ working group around the issue.

“Pat Lam went with his thoughts and the players collectively bought into what the Bears are about how that extends to combating racism.

“They’ve come up with something they feel is appropriate.”

Pre-season for the current campaign started in June 2019, and while there was a halt to training during lockdown, those players will be returning more than a year after preparations began.

“I do worry, because I know what they’re putting the players through,” former Northampton playmaker Dawson said. “We know the intensity the players train through now.

“I’m holding my breath a little bit because I’m worried what the players are going to be like this time next year.”

Getting back into the swing of contact training is another aspect players have had to contend with.

“One thing I felt more of was how physically tired I was and how sore,” Harlequins wing Ashton said.

“Normally we have eight weeks maximum without contact but this has been getting on for four months without it, and it takes the body a long time to get used to it.

“I thought there was something wrong with me, because I’d had three or four months of feeling like normal people do and then you get back into rugby and I am definitely more sore.”

View all posts by Plumbers Woodstock